Video: The portrayal of black people in Dutch television advertising 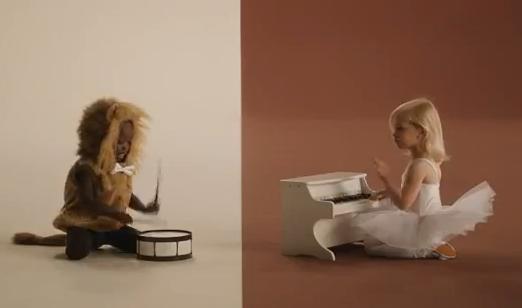 How are black people portrayed in TV commercials in the Netherlands?  In a new TV commercial for  chocolate pasta Duo Penotti (brown and white) the old stereotypical image flashes by, a little black boy playing drums in a lion suit and a little white girl playing piano in a ballet dress. It’s the colonial image of the uncivilized versus the civilized.

About this problem in advertisements  Jan Nederveen Pieterse wrote in  1990,  "Assimilation in the European universe will involve that black men and black women have different roles assigned. Black men are desexualised, black women eroticized . Black men only act in advertising as harmless figures, clearly identifiable, usually marginal positions - lumberjacks and water carriers in colonial Africa, employees or entertainers in the West.”

Nine years later Dutch Caribbean theater maker Felix de Rooy said that only Dutch people act in many in many different ways in advertisements, while blacks only act in a stereotypical way.

But are Nederveen and De Rooy right in 2013? I've selected a few commercials with Dutch black people in them to find some answers.

Commercial DubbelFrisss (2013) Dutch boy asks black girl,"Do come here often". Girl falls in his lap, he says, "We can also drink something the first time." If you want to know what is wrong with this commercial check one of it's predecessors here. Nothing to add.

Monuta, funeral insurance company (2012)
Black man says, "It sounded something like this." The text: family of the deceased already have a hard time. A urban black man searches for classical music, which he has no knowledge of.

Dutch Caribbean olympic sprinter makes Remia saus (2013) Remia saus for oven dish commercial with Dutch Caribbean Olympic sprinter Churandy Martina. During the Olympics Martina spoke Dutch in a way some people from Curacao speak broken Dutch. In in the commercial Martina also talks that way. Dutch media loved it during the Games and some made fun of it. But to cut it short, in the commercial he says he can make that oven dish faster than he sprints. Not everyone was amused.

Commercial of Wehkamp 2013, Wehkamp is a Dutch mail order company Far away is so close, first wehkamp.nl. Every day you discover something new. Pronounced forms. Exotic colors. Patterns that make you think of distant places A whole new world opens up for you. A world of adventure. You look for harmony.For a way to mix all these influences with your own style. Boundaries blur. The possibilities are endless." Let's say it's the first multicultural commercial of the company. Black people are portrayed as exotic and different.

Tutten - Altijd Samen met onbeperkt internet van T-Mobile (Always together with unlimited internet of T-mobile) The The commercial speaks for itself. The Morrocon actor is famous Dutch rapper Ali-B, the others are Surinamese rappers.

Hi mobile commercial (2013) His friend shows the telephone and says, "Look at this track". Black man says after remembering his painful moments, "Aren't there any other tracks?" The commercial is part of a series.

Duo Penotti 2 kleuren in een potti! (Duo Penotti 2 colors in a potti!) - 2010 A chocolate pasta commercial of  Duo Penotti. This is such an old product, Duo Penotti has also become synonymous for  mixed black and withe couple. Although the commercial itself is not racist it does contain imagery which is generally regarded as racist.

Radio 6 Soul and jazz, Now even blacker! Sylvana Simons The Dutch anti-racisme blog http://blankroet.tumblr.com writes about this commercial, "In the new TV advertising campaign Radio 6, DJs Leo Blokhuis and Sylvana Simons are topped with black paint, while the slogan "Now even blacker, Radio 6" appears on the screen. This advertising is racist. "Racist" does not necessarily mean that the advertising was made with bad intentions by neo-Nazis, or people with white caps. But the advertisement places itself in a tradition of oppression and humiliation on the basis of a person's skin color." I don't know if this farfetched.

Knor, Surinamese Roti (2009) Commercial about a black Surinamese man who has lost his roots and has turned into a homely white guy. But his Dutch wife knows what to buy for his Surinamese family. Surinamese Roti. This triggered a discussion within the Surinamese community. Since Roti is a Hindustani dish, some people felt that their community had to promote the product and not a black person.

Yellow papers: Gouden Gids commercial - black cleaner and the shark (90ties) A highly debated commerical because a black man was stereotypical portrayed as a cleaner.

Douwe Egberts coffee commercial - Granies talk Surinamese street langange (2008) An old lady talks to her friend in urban (Surinamese) slang. "So listen, I am in my car, 50 cents comes out my speaker. so I drive fast with that car, right! Comes that police officer with his phoney rims. Says that cop I can't drive that fast here. I say, you're clowning. I am not your bitch." Her friend replies, "difficult." The text appears: "Douwe Egberts. That's different coffee."  The goal of the company was to reach a new market for their coffee. Younger people, I think.


Jumbo Supermarket Sinterklaas and Zwarte Piet Commercial Fast shopping. You're typical Black Pete commercial, which is part of the racist Dutch folklore during the Sinterklaas season in December.

Quaker Cruesli 'help Africa' commercial
"Quaker Cruesli knows how important healty food is, because it gives energy. To go to school and in order to build a better future. Last year we gave, together with you and the World Food Program, one million school meals in Benin. Thanks. Help us this year again. Eat Cruesli here, for school meals there." Maybe it's me, but this is the most stereotypical 'help Africa' commercial I have seen in years.