REVIEW: The Black Count: a real-life action hero in France 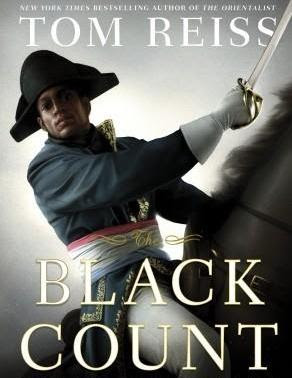 Who doesn’t know Alexandre Dumas? Yes, I’m talking about the French guy who wrote such famous novels as ‘The Count of Monte Cristo’ and ‘The Three Musketeers’. You may also know that Dumas is of African descent.  Well, get this: Alexandre apparently based his stories on the life of his father: Thomas-Alexandre Dumas. Yep, that’s right. The real Count of Monte Cristo is a black fellow (or partly black fellow, to be precise – Alexandre’s old man was a mulatto).

It just so happens, that Thomas-Alexandre Dumas was a swashbuckling general during the French revolution. He rose to great fame, but then experienced a political downfall which eventually caused him to spend years in a dungeon and die in obscurity.
His son, who was only four when Dumas senior passed away, spent his whole life holding onto the memory of his father. He first cast the general’s profile in the persona of Georges, the main character in a novel about a mulatto on a mission of revenge. Later, he perfected this character in the persona of Edmond Dantes – the fictional man whom millions of readers have come to know as The Count of Monte Cristo.

Now, if you’re like me, you may be wondering: “How did I not know this before?” Thing is, until recently, little information on the subject existed. It took an American author (Tom Reiss) and years of tireless research to bring the full story to light. Thanks to Tom Reiss, we can now learn about (and become amazed, fascinated and inspired) by the illustrious figure whom Dumas, the novelist, used for inspiration and had the honor of calling ‘dad’.

Tom Reiss’ historical biography on general Dumas, ‘The Black Count’, was published in September 2012. You should read it. Wait, don’t say it. I know. ‘Historical Biography’ – it sounds potentially dull. But believe me, ‘The Black Count’ is anything but. This book has the flair of a novel. Again, kudos to author Tom Reiss; he not only took effort to reveal the true story behind the Dumas family, but also applied his wit and talent to fashion a highly entertaining narrative. Effectively blending the stories of a man, a country, and the revolutionary and racial politics that shaped them both, Reiss has spawned an adventurous tale that is worthy of a big-budget Hollywood movie. Ultimately, ‘The Black Count’ is a testimony to the integrity and bravery of a former slave (yes - not just a black man, but actually one born in bondage), who nearly single-handedly led the French revolutionary army. Speaks to the imagination, doesn’t it?

I won’t tell you all that happens in the book, but here’s something to get you started: Thomas-Alexandre Dumas, the future general, is born in 1762 on a plantation in Saint Domingue (that’s present-day Haiti). His father is a wealthy Frenchman, his mother an African slave. Alexandre is lucky enough to be freed by his father. He goes to Paris, where he enjoys a privileged education, lives the high life of a 1770s socialite and trains as a swordsman.

Interesting detail: when Thomas-Alexandre is freed from slavery, he is given the surname of his father – Davy de la Pailleterie. His father, by the way, is a nobleman (a marquis), which permits Alexandre to bear the title of count. However, father and son have a falling out when Alexandre wants to enlist in the army, not as an officer, but as a private. Not wanting his family’s legacy to be dragged through the lowest ranks, the marquis forbids his son to register as Davy de la Pailleterie. Therefore, Alexandre enlists under his mother's name - Dumas, to which, as we all know, he and his son brought immortality. How’s that for poetic irony?

So, anyway… At the age of 18, Dumas enlists in the French army. Principled and iron-willed, he quickly rises to the position of general. In fact, the black count becomes one of the finest warriors Europe has ever seen – and one of Napoleon Bonaparte’s fiercest opponents. Unfortunately, he is betrayed (among others, because Napoleon decides to purge all blacks form the French army), and wastes most of his remaining life imprisoned.  Upon his death, his enemies write his true form and character out of history. Napoleon even goes so far as to paint a blonde dude over Dumas’ image.

I’m not surprised about the rave reviews The Black Count is getting - from critics and ordinary readers alike. The BBC chose it as Book of the Week in November 2012. The NAACP nominated it for a 2013 Image Award in the category for Best Non-Fiction. The praise is well deserved.


THE BLACK COUNT (Glory, Revolution, Betrayal, and the Real Count of Monte Cristo), by Tom Reiss, 414 pages, Published in 2012 by Crown Publishers.