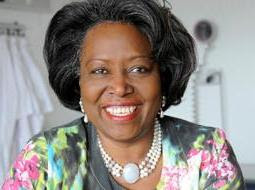 "Cardiovascular disease is the number one killer of women," said Black Dutch Cardiologist Dr. Harriette Verwey in her TEXx AmsterdamWomen talk in 2010 (see video below).

Verwey, who was born in Suriname,  is one of the first cardiologists in the Netherlands who specialised herself in women's cardiology and severe heart failure. She is connected to the Leiden University Medical Centre (LUMC) in The Netherlands.

In 2010 Verwey schocked her audience in the TEDx talk when she said that one out of three women will die of heart disease, or Cardiovascular disease. And that more women than men die of a heart attack or stroke. Death rate are highest among black women and other non-white women due to greater impact of risk factors.

"Because the symptoms of women with heart problems are more different from men, women are often misdiagnosed, symptoms are often related to relationship problems," according to Verwey.

Her TED talk triggered a huge response. A special work group was assembled for professionals in the field, a news portal was set up and an academic chair was established. And the awareness campaign  has since been financially supported by the Dutch Heart Foundation. A day before her TED appearance several hospitals organised open access hours for women with questions about the disease . This year she was also present at TEXx AmsterdamWomen 2012.

Through the initiative "MISSION! Heart failure" she wants to significantly further improve the quality of life of female heart patients.

Worth mentioning is Marian Spier (Surinamese), who is Vice-president/Head of Experience TEDxAmsterdam and the organiser of  TEXx AmsterdamWomen 2012.

Since there is no Black Dutch Powerlist, Cardiologist Harriette Verwey and diplomat Arthur Kibbelaar are on the Black Dutch shortlist 2012 of Afro-Europe.