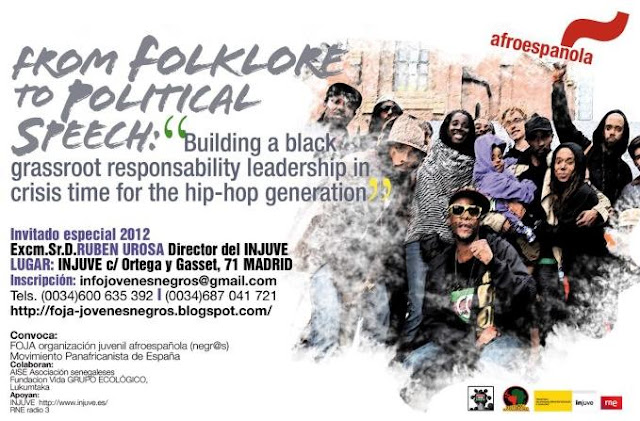 Our man in Madrid visited the highly anticipated event, The Black Spanish Youth Day in Madrid on 19 October. On the flyer it was billed as a hip-hop event where young cats could also express their daily struggles. But it turned out differently. The event was poorly organised and a one man show, youth were not found in the vicinity and our reporter was even ordered to sit down (which of course he refused).

I've just come back from the event and have to say I was very disappointed.

I really like the organiser Abuy Nfubea and his heart is in the right place but he can't orgainse and to be honest I feel it's like an ego trip for him, he loves the sound of his own voice and wanting to me the man who saves black people in Spain, I explained to him once it's a team effort he didn;t like that, The event was embarrassing, it was a youth day but there weren't any youths there, it had English on the flyer alongside Spanish so I was kind of expecting some of the event to be in English as well, so were some Ghanians who showed up, but left after 30 minutes as a whole there wasn't more than 20 people there, most of who began leaving after an hour.

It was just speech after speech from people with no breaks for five hours, I looked around and people had faces like they'd been dragged to church when their favourite TV program was on.

First there were members of parliment, a man from the Spanish Police about stop and search also an author called Reyes Fernandez who wrote about Spains role in the slave trade which alot of people don't know about, she raised some good points about this being taught in school, when it came to question time there wasn't enough people to ask them questions and then when people did ask them questions the organiser abuy cut them off so he could speak I couldn't believe it.

There was no breaks so people could mingle and talk to each other, and then when a video was shown where the speaking was too low and the music too loud, so loud it was distorting which made people cringe.

I spoke to two documentary makers after and they weren't happy both were black and born in Spain but one was has hertiage from Congo and the other Angola what they explained to me was the event should've been in French, Spanish and English because the black people in Spain speak one of these languages they were suprised like I, that they weren't any black people there from the Carib islands or South America, where Madrid is so segrated Dominicans have their neighbourhood, other latinos have their neighbourhood and Africans have their neighbourhood, so they rarely mix, I have friends from all these neighbourhoods and I know they have problems with the police so I know for sure if they knew the could voice their opinons to the police they would be there but I felt like the event being in the day on a Friday didn't help.

After two hours I looked around and people were falling alsleep. The only people still in the room were Abuy's friends. It was hard for me because I didn't understand everything, so I stood at the back and spoke to a girl who translated things for me, there were others speakers one from Colombia and others from Africa but they were speaking to an almost empty room, people started going outside just to talk and stretch their legs.

I was surprised there were no newspapers sellers, (here in madrid Africans sell newpspers but no one buys the newspaper, one Spanish person explained to me the newspaper is very bad so they never buy it in Spain, so really it's begging, the sellers hope to get spare change. Most of them are from Nigeria).

All I could do was shake my head, because alot of funding went into this event and it seemed to me it was for nothing, because things aren't gonna change when there are 20 people there.
Events Spain