Posted by Afro-Europe on October 13, 2012
Danish and Copenhagen based video artist Jeannette Ehlers explores a poorly illuminated and rarely visited topic in her country’s history, the Danish transatlantic slave trade.

You don't automatically think of Denmark (and Sweden)  when you think of this part of European history. But as Danish author Thorkild Hansen wrote in Coast of Slaves: "The slaves walked on their naked feet through two hundred years of Danish history without leaving any other trace than the bit of information we find in the school textbook about Denmark being the first country to abolish the slave trade."

Ehlers is currently artist in residence in Amsterdam-South East. She will work in collaboration with Dutch Amsterdam based visual artist Patricia Kaersenhout on a project for CBK Zuidoost and the Black Magic Women Festival in Bijlmerparktheater in Amsterdam. They will collaborate on a 15 minute project that will open the festival and there will be a duo-show in CBK Zuidoost that opens during the festival (8-11 november) and runs till 31 december 2012

In the video Three Steps of Story, we see Jeannette Ehlers waltzing in a big mirrored hall, where the colorful and rebellious governor Peter von Scholten scandalized the white citizenship by inviting the then “free Negroes” to the ball. It was also von Scholten, who proclaimed emancipation of slaves on St. Croix in 1848. It happened in front of Fort Frederick. 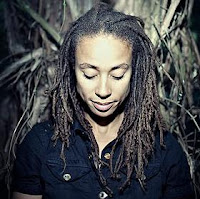 In the video Black Magic at the White House, Ehlers is performing a voodoo dance in Marienborg which has a strong connection to the triangular trade. It was built as a summer residence for the Commander Olfert Fischer in 1744, who since sold it to merchant Peter Windt, who also had created a great deal of wealth from the slave and sugar trade, and who even brought slaves with to his home in Denmark. Several others of the period’s trading men have owned and put their stamp on Marienborg, and today it still plays an important role in Denmark, in terms of its position as the official residence of the country’s prime minister.
Shadows of people on the walls, stairs and water surfaces are seen in the photo series, ATLANTIC, that among other shows Fort Prinzenstein in Ghana, which was built by the Danes and used to keep slaves captured before their journey across the Atlantic.


See pictures and a personal travel experience of the Fort here.

In The Invisible Empire Jeannette Ehlers has worked with her father, Roy Clement Pollard, as narrator and performer. Her father is from Trinidad, W.I., her mother Danish. By involving her own ethnic back- ground she magnifies reality to study the consequences of eroding information.

With The Invisible Empire she looks at today’s slave trade, also known as ‘human traf- ficking’. By introducing her father in this context, she subtly inter- twines her personal history with the narrative of the work. Her questioning of historical ties and personal implications unfolds a strong pull on the viewer while raising awareness for servitude in globalized societies. See this video and other videos at www.jeannetteehlers.dk.