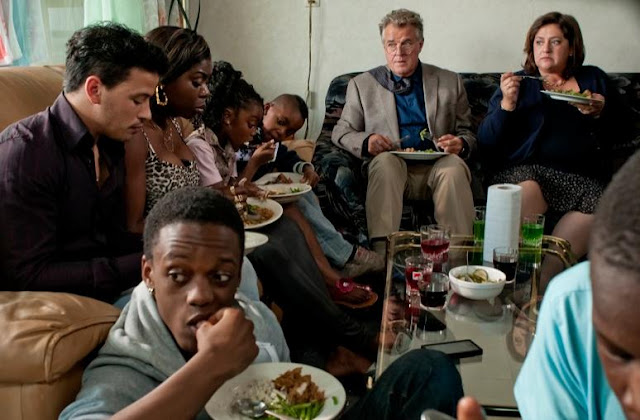 A Jewish boy from a middle class family goes to the black neighboorhood Amsterdam Bijlmer to find a black ghetto girl with a big behind. The story is the film adaptation of the controversial bestseller by Dutch writer Robert Vuijsje, entitled "Alleen Maar Nette Mensen" (or "Only Decent People").

The official synopsis for the film adaptation:


ONLY DECENT PEOPLE is a Dutch comedy based on the controversial bestseller by Robert Vuijsje. Starring Geza Weisz, Imanuelle Grives, Annet Malherbe & Jeroen Krabbe. David Samuels is from an intellectual Jewish family from the posh Amsterdam Old South, where he is often mistaken as Moroccan because of his dark hair. David is a remarkable man on a mission: to find a ghetto fabulous queen with great tits and thick buttocks. His parents and friends declare him mad, but David continues unabated. His search leads him to the Bijlmer, where, after some wild adventures he is left disappointed. Will David ever find his ideal woman - a large, dark sex goddess with booty and brains?


We have written a few post about the book and the upcoming film, so see the links:
Dutch novel reinforces sexual stereotypes of black women
On 'Alleen Maar Nette Mensen' from Robert Vuijsje
Black women stereotyped in Dutch film “Only decent people”

The responses so far on YouTube and on some Dutch film sites show a clear division between white and black viewers. Most black viewers find the trailer offensive, but most white viewers see no harm in it, some even think the film can serve as a dialog on the way black people are portrayed in the Netherlands. Based on the trailer, the film looks like a typical Dutch film, lots of shouting and at least one off topic explicit scene. An American remake? I don’t think so.

The film is planned to be released in theatres on 11 October.


English translation
In the shop: David: No you don't have a big butt in those shoes
Text: David Samuels is nice Jewish guy
At the table with his parents: Parents: How long are you together? Girlfriend: Seven years and 3 months.
Text: With a kind mother
In the room with the dishes: Mother: We begin with the Gefilte fiish [Jewish]  and the herring bon bon. Everyone may just take one of each.
Text: And nice girlfriend. But he really wants something else ...
David on the street: David: Latetly I look at a totally different kind of women. "Hello beautiful ".
Old man at table says:  "African Ladies, is that your field of interest.
At the table with two black men: David: The more darker she is, the closest she is to nature.
At the table with his parents: David: I am in love. Mother: with whom if I may ask? David: with Rowanda Father: Is that a Dutch name?
Changing scene Rowanda and parents: David: she 23 and has two kids.
At Rowanda's home: David: We eat on the couch. Mother: on the couch?
Group black guys: Black man: Now you are going to tell me that Rowando is your only chick.
David: Rowanda is my only chick.
Rowanda hits him: Rowanda: You know what you are, a gingerbread. A white man who hangs around to much with black people. You take over all the bad habits
Angry father: If your are going to ruin your life I will stop giving you money. You won't get anything from me.
Angry Rowanda screaming for balcony: Fuck you with your Oud Zuid [posh neighboorhood] Alleen maar nette mensen.
Film/Television Netherlands