Video: The documentary 'Hope in my heart' of Afro-German poet May Ayim 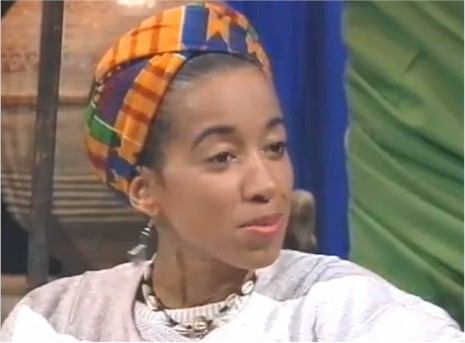 In the documentary which is in English and in German she talk about her life and her experience with racism in Germany.

In the documentary she talks about how racism became more open after the German unification. In Berlin she heard racist comments on the streets. She was surprised to hear that even her friends made racist jokes. She also talks about a conversation she had with her German professor about her thesis.

Her professor said there was no racism in Germany, only hate against foreigners. He warned her to be careful with her claims. She also says that the racism didn't came up suddenly, but it was always there: "people now felt they could express it freely, as if they felt they could finally show the world what we are made of".

In the end she recites the poem 'Afro-German 1' in German, You can read the poem in English at blackatlantic on page 1 and 2.

In the full documentary (which was on YouTube) she also talks about her adoption family and her biological family. The higlights.

May Ayim was the daughter of Ursula Andler and Emmanuel Ayim. Her father, a Ghanaian medical student wanted to be raised by his childless sister, but German law denied him any say in the matter as he was not married to her mother.

After a brief time in a children's home she was adopted by the Opitz family, who raised her with their biological children. She talks about her upbringing with her adoptive parents. She says, they wanted to protect her from racism, but in the process they didn’t  want her not to stand out.

"They wanted me always to be good, dull and obedient. But they became so strict I felt I couldn't breathe. I think I survived because I had humour and because I analysed them."

She talks about the sweet called Negerkuss (Negro kiss). “My white brother told that everyone at home: we don't see that you are black, you are just like us. But when I went outside children said, look mom a Negro Kiss. I could not buy these thinks anymore because I knew the word was derogatory."

She continues talking about what people said to her. "You be can happy that you didn't grew up in Ghana. Your father most certainly runs around in the bush with bow and arrow. And I knew my father had studied medicine in Germany, so I knew these people were lying. They had no idea. They asked me if I was a Besatzungskind [illegitimate child of a member of the occupying forces]. They gave me a pat on the head, but I had no idea what the problem was. I knew something wasn't right."

May Ayim contacted her biological mother, but is was disappoiting.  "I wrote my mother that I wanted to meet her. I never had any negative feelings towards her because I understand it was hard for her back then. I wrote that we should perhaps get to know each other. But she wrote me back stated that she can't get to know me, because she is ill. And also she doesn't want to be remembered of the time that everyone abandoned her. And then I said you abandoned me, even when you had the experience of being abandoned yourself. And that, of all people, you are saying this to me."

She talks about how a group of women between 1984 en 1986 defined themselves as Afro-Deutche (Afro-German) They didn’t want to be called Mulat, Negro or any of those words. This did very positive things to her she says. [May Ayim refers to Katharina Oguntoye and Audre Lorde.]

She grew up with the feeling that although she was born and raised in Germany one part of her should leave [the country]. "The first question was where are you from, the second questions was when do you leave. When do you go back. Irrelevant whether that going back actually existed.  And you can't be German with a black skin," she says.

May Ayim visited Ghana where she met her grandfather. "I talked to my grandfather and he didn't say woman introduce yourself, but he said I have waited for you, I missed you so much. And I spoke to my grandfather as if he was my best friend. Although I just saw him once, that day he became immortal."

What does it mean to Black in Germany

May Ayim was the co-founder of Initiative Schwarze Menschen in Deutschland Bund e.V. (ISD). In the video 'What it means to be Black and German | DW Stories' members of ISD talk about the organisation and the position of Black people in Germany.


To honour May Ayim's work the May Ayim Fund is set up. It's the first fund to support the political education work of Black, African and Afrodiasporic communities in Germany.
In de video Black German activism during the Black Lives Matter demonstration in Berlin and interviews with activists.