CNN: Black in America: It's not just about the color of your skin 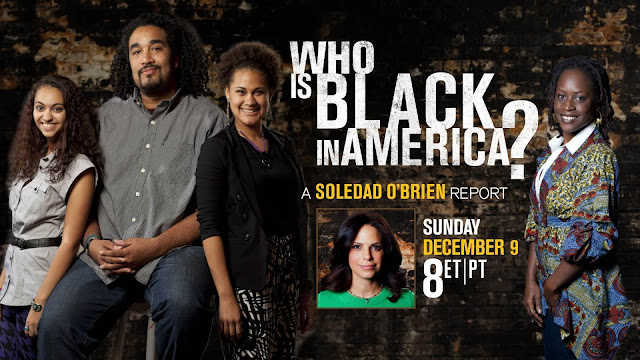 H/T John
On December 9, 2012 at 8:00 p.m. EST/PST, CNN will air its fifth installment of the annual documentary series Black in America. This year’s special – “Who is Black in America?” – was inspired by the scope of the (1)ne Drop Project and will tackle issues of colorism and racial identity.'


WHO IS BLACK IN AMERICA?
In the United States of America in 2012, what does Black look like? Who defines Black? And why is there an argument – or disagreement at all – about who counts as Black? Can someone choose to be Black? Isn’t race assigned at birth, just like gender? If race is a choice for some people, why pick Black? Why not?CNN’s Soledad O’Brien examines these important and provocative questions in an hour-long documentary, “Who is Black in America?”

She follows two 17-year-olds, Becca Khalil and Nayo Jones, on their journeys to find their racial identities. “I’m from Africa,” says Becca, whose parents were born in Egypt, “but the Black kids don’t seem to really want me, and the White kids don’t seem to really want me.” She says Egyptians are dismissed as Middle Eastern or Arab, but she is neither of those things.

Nayo Jones was raised by her White father, and doesn’t really know her Black mom. “I can say that I’m African-American, but I see being Black as being more of a cultural thing,” she says. “I was raised in a White environment, and a mostly White neighborhood.” She insists that makes her less Black. The man guiding Becca and Nayo is Perry “Vision” DiVirgilio, a spoken word poet who calls himself a “Biracial Black man.” He struggled with his own identity issues for years.

Where will Becca and Nayo end up? And why, in 2012, does it really matter? Soledad O’Brien reports Sunday, December 9th at 8pm and 11pm ET. (via CNN)

Also included in the doc are Danielle Ayers, (1)ne Drop contributor, and Kiara Lee, a young woman who conducts workshops on colorism with youth in Richmond, VA. I will be featured in the documentary as an expert of sorts, along with Michaela angela Davis, Dr. William Darity, and Tim Wise, among others.”Who is Black in America?” is an exciting milestone in the development of the (1)ne Drop project. (Source: http://yabablay.com)

It's really sad to see that the "black" community is so extremely hostile towards mixed race people and sometimes vice versa. But I know that the root cause is slavery and colonialism. The sad part is that the colonial poison is still in our veins and I sometimes wonder if  "we" will ever find the cure.
Film/Television USA