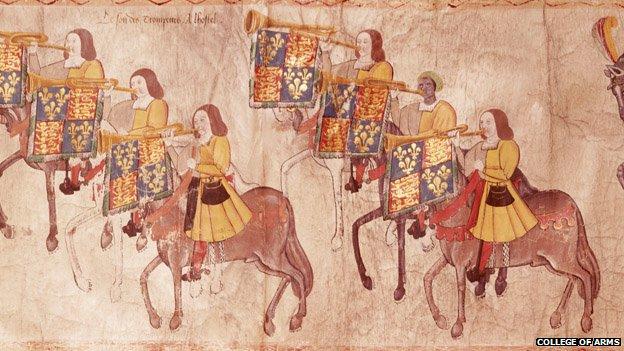 Walk out of Aldgate Tube and stroll around Whitechapel Road in east London today, and you'll experience the heady sights, smells and sounds of the temples, mosques and curry houses of Brick Lane - so typical of modern multicultural Britain.

Most of us tend to think that black people came to Britain after the war - Caribbeans on the Empire Windrush in 1948, Bangladeshis after the 1971 war and Ugandan Asians after Idi Amin's expulsion in 1972.

But, back in Shakespeare's day, you could have met people from west Africa and even Bengal in the same London streets.

Of course, there were fewer, and they drew antipathy as well as fascination from the Tudor inhabitants, who had never seen black people before. But we know they lived, worked and intermarried, so it is fair to say that Britain's first black community starts here.

There had been black people in Britain in Roman times, and they are found as musicians in the early Tudor period in England and Scotland.

But the real change came in Elizabeth I's reign, when, through the records, we can pick up ordinary, working, black people, especially in London.

Shakespeare himself, a man fascinated by "the other", wrote several black parts - indeed, two of his greatest characters are black - and the fact that he put them into mainstream entertainment reflects the fact that they were a significant element in the population of London.

Employed especially as domestic servants, but also as musicians, dancers and entertainers, their numbers ran to many hundreds, maybe even more.

And let's be clear - they were not slaves. In English law, it was not possible to be a slave in England (although that principle had to be re-stated in slave trade court cases in the late 18th Century, like the "Somersett" case of 1772).

In Elizabeth's reign, the black people of London were mostly free. Some indeed, both men and women, married native English people.

The parish records of this time from "St Botolph's outside Aldgate", are especially revealing. Here, among French and Dutch immigrants, are a Persian, several Indians and one "East Indian" (from today's Bengal).

In this single small parish, we find 25 black people in the later 16th Century. They are mainly servants, but not all - one man lodging at the White Bell, next to the Bell Foundry off Whitechapel road, probably worked at the foundry.

Some were given costly, high status, Christian funerals, with bearers and fine black cloth, a mark of the esteem in which they were held by employers, neighbours and fellow workers.

Among the names are these: An illustration of a scene from Othello The lead character in Shakespeare's play Othello is black

Christopher Cappervert [ie from Cape Verde] - "a blacke moore"
Domingo - "a black neigro servaunt unto Sir William Winter"
Suzanna Peavis - "a blackamore servant to John Deppinois"
Symon Valencia - "a black moore servaunt to Stephen Drifyeld a nedellmaker"
Cassango - "a blackmoore servaunt to Mr Thomas Barber a marchaunt"
Isabell Peeters - "a Black-more lodgeing in Blew Anchor Alley"
"A negar whose name was suposed to be Frauncis. He was servant to be [sic] Peter Miller a beare brewer dwelling at the signe of the hartes horne in the libertie of EastSmithfield. Yeares xxvi [26]. He had the best cloth [and] iiii [4] bearers"

Among later names, we find:

Marie - "a Blackamoor woman that die in the street"