BHM UK: Black people in classical music from past to present

Classical music is the popular art music from the classical period, so of course also black people gave it a try. And with success. Because it's still BHM in the UK, a look at some of the European stars of past and present.

First, violists George Bridgetower and Joseph Emidy who wowed the audiences in 19th century. Next, the famous composer Samuel Coleridge-Taylor, who in 20th century was called the "African Mahler". And as a bonus the remarkable story of UK's Chi-Chi Nwanoku, the 100 meter track star who became a classical double bass player and a presenter on BBC Radio 3. And to end, an overview of Britain’s Paul Gladstone Reid, who talks about how black people influenced classical music in Europe.

First the story (above) of violist George Bridgetower (1778 - 1860 ) told by Pulitzer Prize-winning and former United States poet laureate Rita Dove. Her book, “Sonata Mulattica” , a collection of poems subtitled “A Life in Five Movements and a Short Play,” intertwines fact and fiction to flesh out Bridgetower, the son of a Polish-German mother and an Afro-Caribbean father. Read more about Bridgetower at www.100greatblackbritons.com 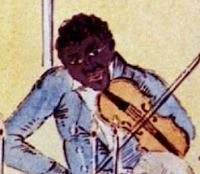 Joseph Emidy (1775 – 1835) is  the19th century composer and virtuoso violinist, who was born in West Africa in c.1775, taken as a slave to Brazil and subsequently becoming one of the leading violinists at the Lisbon Opera House. He also became a famous and celebrated violinist and composer in Cornwall in the UK.   Read more about Joseph Emidy at the BBC Joseph Emidy: From slave fiddler to classical violinist

Samuel Coleridge-Taylor (1875 – 1912) was an English composer who achieved such success that he was once called the "African Mahler". He visited America on several occasions, at a time when it was still extremely hard, if not impossible for talented black Americans to fulfil their cultural aspirations, and was therefore seen as a champion for their cause. The video below is about that American connection. Read more of Taylor at www.100greatblackbritons.com

Fast forward today, the story of Chi-Chi Nwanoku (born in London of Nigerian and Irish parents), the  former track start,who is now a double bassist, founder member and principal double bassist of the Orchestra of the Age of Enlightenment and fellow of the Royal Academy of Music. Read more at www.oae.co.uk