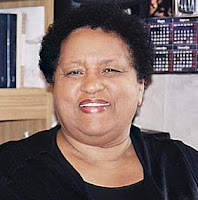 As the daughter of Oliver Golden, an African American expatriate and agrarian activist of the early 1900's, and Bertha Bialek, youngest daughter of Polish American emigres of Jewish descent, Lily Golden has a special place in history.

Lily Golden was born (1934) in Uzbekistan and educated in the Soviet Union at Moscow State University, where she later worked in the Institute of African Studies and eventually became its director.

During the 1950s she also became a nationally ranked Sovjet tennis player, competing in tennis matches in Central Asia.

In 1988 she moved to United States and in 1993 she became a distinguished scholar in residence at Chicago State University.

Dr. Golden was also the author of the book My Long Journey Home, where she wrote about her life as a dark-skinned Russian surviving in and struggling against turbulent changes.

We may have to look towards Russia as the only white homeland left, says the American Renaissance, a white supremacist organisation which eulogises their Russian comrades-in-hate for waging a violent campaign against racial minorities in Russia in the years between 2002 and 2007. 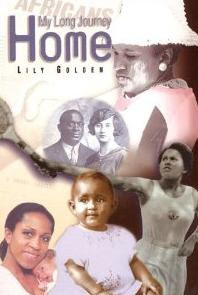 But the life and family history of Lily Golden, a 75-year-old Russian African-American professor, still active in the intellectual and racial rights world, have proven the supremacists in both America and Russia wrong.

A third-generation member of a Black-Native/American-Jewish-Russian family which settled in the Soviet Union in 1931, Golden's life is a challenge to historians who limit the history of black people in Russia to the confines of the Moscow International Youth Festival in 1957.

Thanks to the British writer, Hugh Barnes, we know that the history of black people in the Soviet republics goes a long way back. Barnes made the groundbreaking research on the black Russian poet, Alexander Pushkin's great-grandfather, Ibrahim Petrovich Gannibal, who had seven children but whose progeny's whereabouts are shrouded in mystery.

Barnes revealed in his book, Gannibal: The Moor of Petersburg, that Russia's pre-Pushkin black communities had made an immense contribution to nation-building. It is no surprise therefore that Lily Golden, a legend in her own right, has followed in their footsteps.

"By the time of Catherine the Great, negro slaves were a common sight in St Petersburg," Barnes wrote. "In the grand saloons of Millionnaya Street, they appeared in a variety of roles, such as pets, pages, footmen, mascots, mistresses, favorites and adopted children."

Golden, with her unusual combination of African, Native American, Jewish and Russian ancestry, has become a tower of strength for those fighting against racial bigotry. She says: "I belong to all races. I am African-American, a Polish Jew and a Red Indian who became Russian in everything but blood."

Her grandfather, Hilliard Golden, was an African slave freed in Mississippi in 1865 who married a Native American (or Red Indian) woman and had 10 children with her. Hilliard soon became one of the wealthiest black landowners in Mississippi, but had to flee the notorious Ku Klux Klan who twice burned his home and crops.

One of Hilliard's sons, Oliver John Golden, Lily's father, was an African-American communist and an agronomy expert who specialised in cotton growing. He married a New York-based Jewish woman of Polish origin, Bertha Bialek, also a communist, who stood condemned by her parents for marrying a black man. Oliver and Bertha moved to the then Soviet republic of Uzbekistan in 1931.

Lily now looks back on her mixed ancestry with pride and dismisses racial supremacists as "myopic buffoons playing on a stage they know nothing about". Illustrating her point, she says: "My daughter, Yelena's identity is even more complicated, because she is me plus an African father from Zanzibar, himself a mixture of different kinds of blood."

Born in July 1934 in Tashkent, capital of Uzbekistan, Lily had to adapt herself to the local conditions in order to cope with racial hostilities in the Soviet Union then played down by the Kremlin.

Later, as a brilliant young woman, she won the affection of the Soviet leadership and became the "brain behind" (according to Western propaganda) President Nikita Khrushchev's policy of exporting revolutions to Africa. "At least, this is how the capitalist world thought I was," Lily now says.

In those days, Western newspaper headlines such as "Lily Golden, the brain behind Khrushchev's revolution exports" were typical of what she now calls "hostile headlines in the late 1950s and early 1960s".

Lily had been influenced by her association with renowned African-American pan-African activists such as W.E.B. Du Bois, singer Paul Robeson and others; her alliance with the Kremlin, and her involvement with the emerging leaders of independent Africa.

Interestingly, she had survived repression by Josef Stalin's government which, among other things, had cut all communication with about two million Americans then settled in the Soviet Union. They, like Lily's parents, had made the transatlantic journey to help build a nation they idealistically thought had championed racial equality and freedom for the subjugated and downtrodden.

"Some white and black Americans had to go back home, and those who stayed had to adopt Russian names and later became assimilated, following Stalin's decree in 1937 mandating foreigners to either apply for Soviet citizenship or quit," says Lily, adding: "Obvious American names would have sounded suspicious in an anti-capitalist regime."

Born as Lily, her name was later twisted to Liya Oliverovna Golden to sound less American. She did not know her relatives left behind in America until 1985 when she had the opportunity to travel abroad for the first time.

When she appeared on a television talkshow in Chicago, 150 relatives of hers showed up to help solve the identity puzzle, which made it possible for her to trace her roots back to Mississippi where the family of her grandfather, Hilliard, had settled and made a fortune as landowners.

Lily made several trips to America thereafter and in 1988 decided to stay. For the next 15 years, she became famous as a black Russian activist, fighting for minority causes and racial harmony.

She went back to Moscow in 2003 to be close to her then newly-born granddaughter by her daughter Yelena, who, in the intervening years, had become Russia's most popular black television host.

A distinguished scholar in residence at Chicago State University, Lily is an active member of the board of directors of both the Russian-African Business Council and the San Francisco-based Centre for Citizen Initiatives.

She is also the vice-president of the International Charity Foundation in Chicago, and a member of the New York-based International, Intercultural Black Women's Studies Institute. She has represented these organisations several times at the UN.

Her father, Oliver Golden, was educated at the Tuskegee University, one of the first academic institutions for the children of former slaves. He became a student of the renowned professor of agronomy, George Washington Carter.

"My father would leave no stone unturned in search of freedom," says Lily, citing his enlistment with the French Army in the Second World War. It is from there that as a young man he found his way to the Soviet Union in 1924 where he enrolled with the prestigious Communist University for Oriental Workers in Moscow that recruited revolutionaries from Asia and Africa.

Years later, after Oliver had settled with his wife in Uzbekistan, he recruited 16 other African-American cotton growers in the quest for freedom in a "country of the coloured people". According to Lily, Uzbeks were considered coloured by the then standards in America.

Lily herself graduated from Moscow State University in 1957 as a historian majoring in African-American History. She later worked at the African Institute of the Soviet Academy of Sciences.

She says by the time she was travelling across the Soviet Union in the late 1960s attending conferences and lectures given by Du Bois and Robeson, newspapers in Africa had been influenced by the "capitalist world" to publish articles against her.

In Ghana, one newspaper ran a story alleging "I was a secret agent for China", while another claimed "I had been deported following suspicions of involvement in treason-related activities in Kenya, a country I had never set foot in when it was still fighting for independence from Great Britain".

Lily's political star shone the brightest during the 10 years between 1957 and 1967, through a mixture of myths born of the Western media propaganda against her and internal Soviet realities.

When her husband, the Zanzibari nationalist, Kassim Hanga, became one of the masterminds of the January 1964 coup in Zanzibar (which was branded a revolution), the Western media alleged that Lily was somehow involved with the coup.

Time magazine reported on 24 January 1964 (12 days after the coup) that Hanga had been made "vice-president, a bitter Zanzibari with a Russian wife, a Moscow education, and a violent hatred of the US. Last November, when the Parliament moved to express formal regret over President Kennedy's death, Hanga walked out in protest".

Hanga had been a short-lived parliamentarian in the pre-independent Zanzibar Sultanate, then a British protectorate. He had met his future wife, Lily Golden, for the first time during the 1957 Moscow International Youth Festival. They married three years later when he went back to Moscow to study for a degree in economics at the then newly-opened Peoples' Friendship University, named after the assassinated Congolese prime minister, Patrice Lumumba.

Hanga cleared the five-year university programme in one year, but stayed for a while. He returned home and took part in writing Zanzibar's independence constitution in London.

And then the coup happened and Hanga was appointed vice-president of the "revolutionary" government. He later became minister for union affairs in the interim union government of Tangan- yika and Zanzibar following the merger between the Republic of Tanganyika and the People's Republic of Zanzibar on 26 April 1964.

But then Hanga mysteriously disappeared soon after. Lily had seen him last in Moscow, when he had gone there straight from London after helping write Zanzibar's independence constitution. Lily says, "though we maintained occasional correspondence, it was the last time I saw him, reportedly due to political tensions at home".

As Lily was then barred from travelling abroad, she had to engage herself in the arduous task of searching for her husband through acquaintances such as Stalin's daughter, Svetlana Yosefna.

Svetlana herself was searching through KGB files for what lay behind the death of her Indian husband, a politician whose relationship with her as Stalin's daughter had been frowned upon in Moscow.

Through the help of her acquaintances, Lily later found out that Hanga was languishing in prison after crossing swords with his former comrades-in-arms in Zanzibar. He had been taken to task for allegedly betraying the ideals of the "revolution".

In 1968, news reached Lily that her husband had died, after months of brutal persecution in jail. Later, "top secret" files revealed that Hanga had been shot at close range. His dismembered body was shoved into a sack attached to a sinker and dumped in the Indian Ocean.

Lily has never been to Tanzania, but her TV-star daughter, Yelena, visited Zanzibar 10 years ago in search of her roots and met scores of relatives, including her paternal grandmother.

Yelena had earlier taken a similar journey to America in search of her relatives on her mother's side. According to her, her Muslim grandmother in Zanzibar and her Jewish grandmother in New York had at least one thing in common. They were both shocked by the negative answer to their first question of whether Yelena was married.