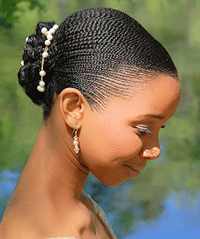 Netherlands: A Dutch black girl with nappy hair was excluded from ballet class because she didn’t wore her hair in a smooth bun.

But a week ago the Dutch Equal Treatment Commission ruled, that a dance school may not force students with black hair to wear their hair in a smooth bun.

The mother of a 12-year-old girl filed a complaint with the Commission last year against a dance school in The Hague. The school has a rule that hair of dancers in classical ballet must be worn in a bun. The student in question has black hair and usually wears her hair in pigtails.

When the girl wanted to attend ballet class with her braided hair up in a bun, the dance school denied her access to the classes as long as she would not wear her hair in a smooth knot.

According to the student and her mother it takes too much time to get black hair without braids in a knot. They offered to prepare the hair for performances and official events of the ballet school, but the dance school found it inadequate. They argued that other students with black hair did conform to the prescribed guidelines.

The dance school argued that no distinction is made on the basis of race, because the rule applies to everyone. But the Equal Treatment Commission ruled that the school indirectly does make the distinction, because having nappy hair (black hair) is associated with ethnic origin.

According to the hair website Kroeshaar.com the hairstyle on the photo is not allowed